So, last week, I was getting pretty frustrated with the bike-buying process. I kept hunting on Craigslist, but I also had a new bike in the back of my mind. I’d seen a bike at REI for an excellent price. Since it’s almost the end of the season, local shops are starting to clear out the 2012 bikes to make room for the 2013 models.

Brandon told me repeatedly I was allowed to spend the extra money to buy a new bike, but I just didn’t feel right about it. I knew the bike I had seen was a great deal, and it fit me well. However, by the time I paid for the bike, water bottle cages and taxes, it would end up costing right at $1,000. Not exactly chump change. For some reason, the number $600 has been stuck in my head since I bought (and then resold) the last bike via Craigslist. So, spending $400 more just didn’t feel right. Plus, that would eat up a lot of money that could potentially be spent on getting a road bike for Brandon. And since it’s just not as fun riding by myself, I really want to find one for him too!

Back to Craigslist. All last week, I had seen a pretty turquoise Trek ladies road bike. I initially thought it looked a little goofy because the handlebars were wrapped in pale pink handlebar tape, so I hesitated to email the seller. I also thought it seemed dumb to buy a 5-year-old bike. Then I had a come-to-Jesus chat with myself and realized two things: 1) I could change out the handlebar tape; 2) Bikes are a lot like cars in that they lose half their value once you take them out of the local bike shop.

Needless to say, I emailed the sellers for a little more information, and I’m so glad I did! The asking price of $800 was a little more than I was willing to pay (see getting a bike for Brandon!) so I emailed and offered a ridiculously $550 figuring I would receive an email back asking $600. The seller said if I would pay $600, he would throw in the helmet. Sold! Side note: I think since I waited so long to email the sellers, they were a little more willing to drop their price. I’m guessing the ad had been up for a few days and had received little interest.

On Saturday morning, Brandon and I got up and drove to McKinney to meet the seller and his wife. Turns out, the seller’s wife bought this bike for a single triathlon she did five years ago. Since then, it has been sitting in their garage looking pretty. I hopped on the bike and took it for a jaunt around the neighborhood. It fit me perfectly and was so much fun to ride! After looking over the bike to make sure there were no major flaws, we said we’d take it and handed over our $600.

This is where the deal got sweetened quite a bit. We had brought some extra cash in case they had additional items they wanted to sell. The lady selling the bike asked if I’d like to have her cycling shoes. (Don’t worry…it’s not as gross as it sounds to wear someone’s shoes.) They fit me perfectly, so I ended up with those too. Only they just gave them to me rather than selling them. And they also threw in a pair of gently used nice and clean cycling shorts, two saddle bags, an extra pair of cycling gloves and an inner tube and a couple tire keys. Those items plus the helmet and the pedals already attached to the bike made this a pretty sweet deal. If I were to have purchased all the accessories myself, especially shoes and pedals, I would have paid more than $300 for all new stuff.

I spoke with several friends who cycle, and everyone has told me I got a sweet deal on this whole package. I’m so thrilled with my new toy! Here’s a photo from the Craigslist ad. Not the greatest quality photo, but you get the idea. 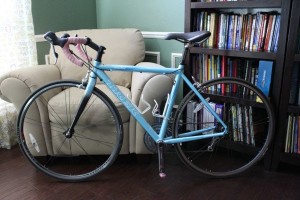